If this was a Saturday night drama series it would be at this point, just before the opening titles, you would be watching a recap of last week’s episode, in which some prat said something that got me really angry and a rage ensued. Cut to tonight’s opening titles with me looking down on a guy who had just been decked with a punch!

Just to assure you that the above never happened, well the rage did but I, courtesy of GymGuyMark, found a way to calm it down. Boxing, or to be precise, Thai Boxing.

When GymGuyMark first suggested the idea I have to admit I thought I’ll break the blinkin dummy mate, but the beauty of having a PT (personal trainer) who is a trained martial arts expert, is that you get to punch him (or try to) safely. So when I arrived at the Western Tennis Club Gym on Wednesday night, I did my normal ten minutes on the treadmill, a few stretches and when GymGuyMark appeared, it was straight upstairs to the Weights Room. Luckily to start off with it was quiet, because when GymGuyMark appeared he was carrying a pair of boxing gloves and a pair of large pads; I thought ‘oh flip, hee was serious’. With the words “right Miss Angry, let’s get that rage sorted” I donned the gloves and we were off.  Now I don’t know if you have ever worn boxing gloves before, but it is the strangest feeling, your hands are in a permanent state of ‘grab’ and you can do nothing with them.  They are the most unglamorous accessory I have ever worn but as soon as you have them on, you feel like a fighter straight away. After a lesson on the right stance and how to hold my hands to protect my gorgeous sweaty face, he let throw my first completely girly punch. What a woos! It would not have knocked out a fly, never mind killed it. Time for the GymGuyMark guide on how to keep your guard up, where to put your elbows, how to keep your weight on that hip, and stay light on your feet. It was like Strictly Coming Boxing but with much less sparkles. There is so much to concentrate on that when you actually come to finally make the jab/punch/girly slap you forget what you are supposed to do and just lunge. But, again, with a bit of expert tuition from GymGuyMark, he soon got me thumping those pads and with every sling of my right arm, I could feel not only the tension disappearing but that this was acutally a darn good workout as well. 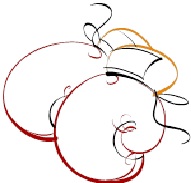 Now let me quickly clarify something, I am not advocating violence of any sorts as a means of resolving issues. I don’t even like watching boxing. This exercise was a way of me releasing tension in a controlled environment as part of my workout and with a trained expert holding the pads. Sinking your fist into the wall or into anyone’s face is NOT the answer. Correction, it is NEVER the answer!

GymGuyMark explained the reason behind every move and why placement of your arms and legs are so important, mainly so you don’t break your arm or wrist by doing something stupid, and by the time the session had finished I had even managed a wee Thai Boxing Routine of punch, punch, knee, knee. Now for someone who is challenged by The Slosh on the dance floor it was a minor miracle that I managed at least four half decent goes at it, through many giggles and slagging!

We rounded off Gym time with nearly 60 sit ups, (and no rest, yay!) and thinking this is so going to hurt tomorrow, left GymGuyMark to his next victim and headed home. Hand on heart, I thoroughly enjoyed this session. It was challenging in so many different ways not just because Thai Boxing is so different from anything I have ever done before, but because I could actually feel my arm muscles working every time I tried to hit the pads GymGuyMark held. To quote myself as I left the Gym … “now, that we will be doing again … “. Sure I heard a thud, wonder if it was GymGuyMark fainting !!!!!