To say that the last few weeks have been challenging both personally and professionally would be an understatement.  It would be nice if sometimes the God of Ying and Yang would balance things out, so that when we have a bad day at the office, we have a good day at home. But, recently, it seems to be that the only balance is a negative one, definitely in the red and way into overdraft.

Monday night at the Gym completely depressed me. GymGuyMark weighed me and I hadn’t lost anywhere near as much weight as I had hoped. My immediate reaction was anger at myself; I couldn’t understand why when I am sweating my ass off at the Gym that I have only lost, what to me seems, so little. I tried to tell myself that it was a slow and steady loss but it still affected me. Thank God for GymGuyMark’s patter, he kept me going for the rest of the Cardio session.

Next challenge came on the morning of Tuesday 12th June, my 49th birthday.  When I woke up and looked in the mirror, the person looking back at me resembled a cavewoman who had just been dug up from the peat bog that she had drunkenly fallen into thousands of years ago.  My eyes had bags and purses, there was a spot on my nose and as for the hair, well let’s just say Wurzel Gummidge would have not been seen dead with it. Thanks to many many lotions and potions, and a good old widening of the hole in ozone layer with much hair spray, I think I left the house looking almost half decent.  But OMG did I feel 49, and on this occasion I cannot blame the Gym session the night before as I know I didn’t work as hard as I could have. However I survived the day mainly thanks to the many cheeky texts and messages and the nice surprise of ice lollies. Later it was off to the cinema to drool over Will Smith in Men in Black 3 and Chris Hemsworth in Snow White and The Huntsman, then home to an amazing pile of cards and parcels.

Those who know me well, will be aware that my age has never bothered me; I act like a daft 18-year-old most of the time, but for some reason 49 has got to me. Is it because next year I will be out of one age box and into the 50 to 59 one, or is that I am starting to genuinely feeling the ravages of time, too much gin, too many cakes and caffeine coupled with long work days? Or perhaps my face cream just isn’t strong enough? Do Polyfilla do anti-wrinkle cream? How bad is bottox for you?

When you are tired and ‘run down’ it is all too easy to blame your age and your ‘self-assumed’ lack of abilities for your low motivation/self-confidence. After much reflection, I realised that for me retreating into the excuse of ‘well I am 49 you know’ is crap so this morning, forcing myself to wake up and smell the treadmill,  I went to the Gym on my own and took it out on Cardio machines. I pushed myself as far as I could go, setting myself my own targets and did what I set out to do. After all self-belief is as big a factor in motivation as age, fitness or ability. In my opinion it doesn’t matter how much belief others have in you, if you do not believe in yourself, whether personally or professionally, you will never believe what others tell you. When I thought about it, I am damn lucky to be 49 and so what if time is marching across my face or I have a constant fight with gravity in certain parts of my body, there is nothing that good lycra support, family,friends, a damn good workout or the giggle from making a cork from a bottle of Prosecco fly across the neighbour’s roof won’t sort out.

So I would just like to take this opportunity to say thank you to everyone for all the wonderful birthday cards, presents, cheeky texts and other messages, but if you don’t mind I would like to single out the card that came from my Mum and Dad … I think it says it all and you know what  … I believe it! 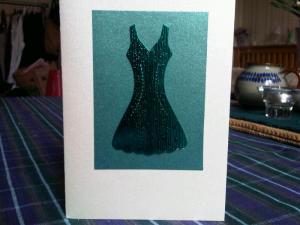 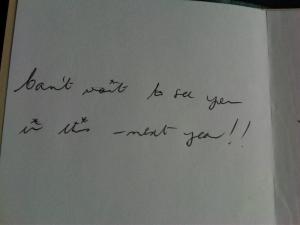